If fly fishing is the sporting activity with the most equipment associated with it, fly tying comes in a close second.

Fly tiers are natural tinkerers who will go to almost any length to find a better, more economical, more efficient way to do things. Over the ages, the mechanics of dressing fly hooks with feathers, tinsel, silks, and other materials, have led to the invention of some trying innovative and beautiful gizmos and tools. 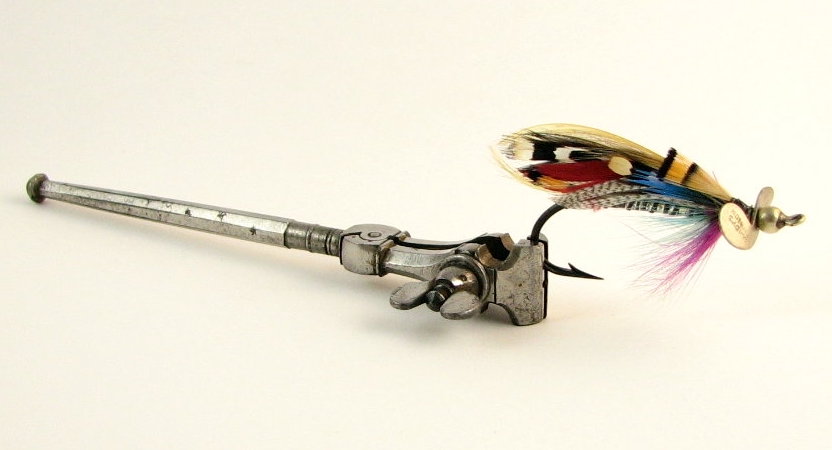 The basic fly vise, in which the hook is secured for tying (although some of the most talented fly tiers have tied with only their hands), has seen many iterations over the years, with attachments of all kinds to secure materials, adjust tensioning, and just generally do anything a tier wants to do in creating a fly.

Some of the most beautiful and collectible fly tying sets include antique fly tying boxes and cabinets such as this British Cummins Fly Tyer’s Chest and the Fly Tying Kit from Holtzapffel of London.

The fly tier’s chest from W. J. Cummins of Bishop, Auckland, U.K. includes sections for storing tools and materials as well as pull-out trays for trout flies. The chest’s owner had equipped it with an early vise and hackle pliers, as well as Rodgers and Sons scissors and Wheatley tweezers. A scarce hook disgorger patented by Jeremiah Foard in 1882 and a marked Farlow and Co. fishing priest used to dispatch your catch, were also found in the chest.

The Cummins chest was sold at auction with a lot including a modern streamside fly tying vise made by Ari Hart, one of the most famous modern fly reel designers in the world. The portable vise was made to bring along to tie flies riverside.

The Holtzapffel fly tying kit is perhaps the finest of its kind, with a finely tooled brass fly vise, several different sized hackle pliers and tweezers, tying scissors and a custom fly tying knife, all in fine fitted leather case.

They are many boutique craftsmen and toolmakers producing amazing fly tying tools today that have benefitted from hundreds of years of evolution in the craft.

The perfect gift for the holidays. Use special code MOLDY10 to get $10 off the cover price.