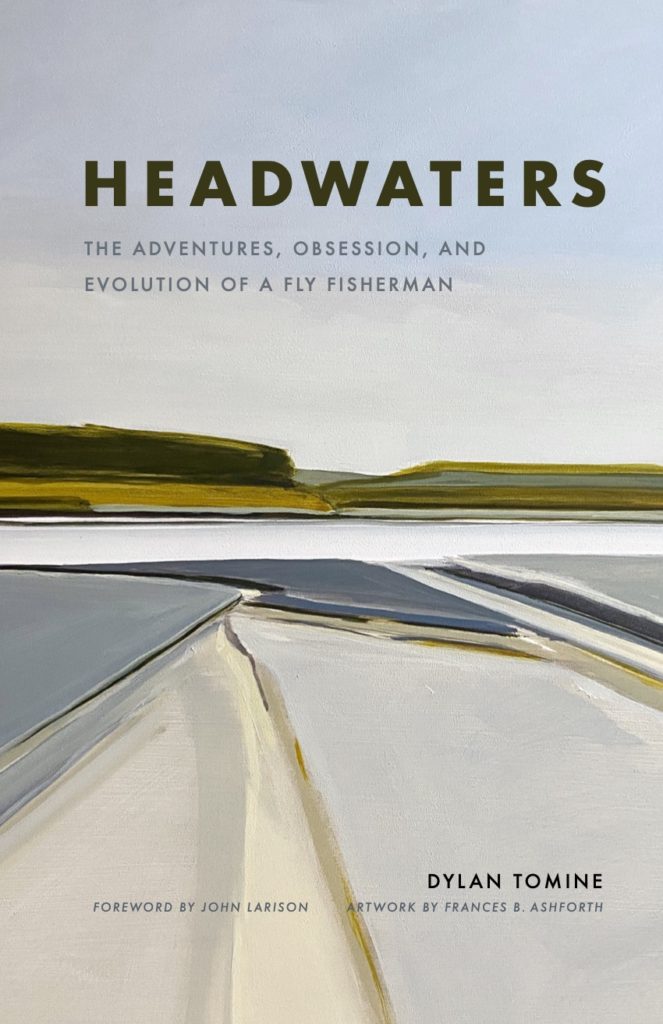 Don’t miss this one, coming in April 22
From Patagonia:
About Headwaters: Christmas Island. The Russian Arctic. Argentine Patagonia. Japan. Cuba. British Columbia. Dylan Tomine takes us to the far reaches of the planet in search of fish and adventure, with keen insight, a strong stomach and plenty of laughs along the way. Closer to home, he wades deeper into his beloved steelhead rivers of the Pacific Northwest and the politics of saving them. Tomine celebrates the joy—and pain—of exploration, fatherhood and the comforts of home waters from a vantage point well off the beaten path. Headwaters traces the evolution of a lifelong angler’s priorities from fishing to the survival of the fish themselves. It is a book of remarkable obsession, environmental awareness shaped by experience, and hope for the future.
About the Author: Dylan Tomine is a father, writer, conservation advocate and recovering sink tip addict, not necessarily in that order. His book, Closer to the Ground: An Outdoor Family’s Year on the Water, in the Woods and at the Table, was a National Outdoor Book Award honorable mention. He is also a producer of the feature-length documentary, Artifishal, which has been watched by more than 3.5 million viewers. He lives in Bainbridge Island, Washington.

Kirkus Review: A die-hard fly fisherman reflects on the glories of angling and his role in diminishing the natural world.

“Fishing was never a sport, a pastime or hobby for me. It was, and continues to be, who I am.” So writes Tomine, who has been fishing the Skykomish and other northwestern rivers since he was a kid. He was so obsessed that on Sundays, his single mother, a graduate student, would take him to the river and, as he cast his lines, do her homework while waiting in a parking area nearby. In this collection of his writings in sports and fishing journals, Tomine recounts some of his excellent adventures. In one shaggy dog story, he recalls being in a van in Russia in which was hidden a block of Swedish cheese so stinky that it ignited a pitched battle over which of the fishing adventurers had farted. In a less unpleasantly odorous tale, the author praises an Argentine barbecue during which his plate held “a significant fraction—like one fourth to one half—of an entire animal.” Tomine’s principal goal is to bag steelhead trout, of which he writes with affection and intelligence. His principal opponent throughout is a bureaucratic system that stocks the rivers of the Pacific Northwest with hatchery-bred trout, which crowd out wild fish even with the removal of dams on those streams. “If the point of dam removal is wild salmon recovery,” he asks, “why would we spend millions of dollars on something that works counter to the point?” Tomine ponders how climate change is affecting fish populations, wild and hatchery-grown, and his own role as a world traveler in putting down a heavy carbon footprint on the land. Mostly, however, the pieces are easily digested celebrations of the easy freedom of being on a river, rod and reel in hand. “What is fly fishing? Everything.” Anglers will find Tomine’s book a spirited defense of that thesis.

Praise
“Early on in this wonderful collection, Dylan Tomine says he was “born to fish.” He was obviously born to write, too. Headwaters exemplifies the very best in angling literature, with prose that is, at various times, hilarious, profound, and mournful. The book makes you fight simultaneous urges—Grab a rod and go? Or keep your butt in the chair and continue reading? You win either way.” –– Monte Burke, author of Saban and Lords of the Fly
“A someone who’s spent the bulk of his life in pursuit of some fish or another I wish I’d had this book much sooner, to enjoy, yes, but also as a source of validation for a way of living, a talisman to hold up against those with the audacity to suggest that there is some other, greater, more important activity to pursue. Reading Dylan Tomine on fishing is a rare opportunity to glimpse the essential, but often hard to pin down, reason so many of us return again and again to cast our hope into the water.”  — Callan Wink, author of Dog Run Moon and August
“Headwaters is a book to reach for when you want to go fishing but can’t. It’s rich with the pleasures of angling: exploration, youthful obsession let off its leash, awe before fleeting beauty. In prose as fertile as a beaver pond, Tomine pays homage to the scaly abundance that still swam the rivers of the Pacific Northwest during the 1990s, and he bears witness to the steep decline in that abundance over the years since. Yes, this is a book that charts a fishing life, one man’s movement from angling bum to fish conservationist, but it’s more than that. Like a line cast over shadowed water, these pages come taut with hope for what happens next.” — John Larison, author of Whiskey When We’re Dry