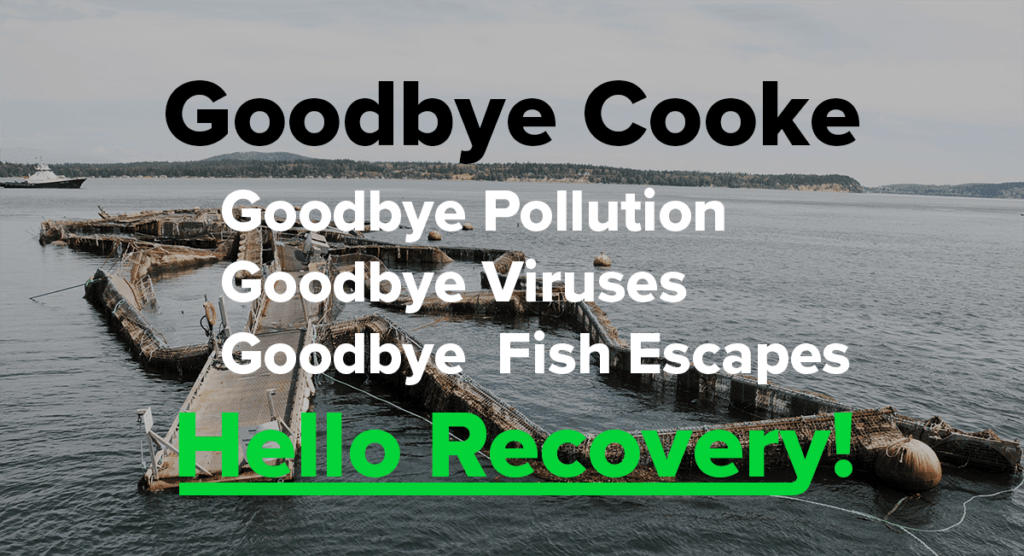 Grassroots advocacy at work and a huge victory for wild fish.

DNR is giving Cooke until December 14th to harvest any remaining fish and completely remove all of their facilities
and debris from Puget Sound. As the sole commercial net pen operator in Washington, this monumental decision will
effectively remove this industry from Puget Sound by the end of the year. This action will immediately cease the
chronic untreated pollution discharged daily by this industry for over three decades, finally allowing these degraded
sites to begin the process of natural restoration as part of the largest passive restoration project in Washington’s
history. The decision will also eliminate many major risk factors that harm the recovery of wild salmon and steelhead,
including ending the risk of exposure to viruses, parasites, and diseases that are amplified and spread at unnatural
levels by massive densities of farmed fish and the risk of future catastrophic escape events in which farmed fish could
compete with, attempt to interbreed, or spread pathogens to threatened and endangered wild fish.

DNR’s decision will also restore public and Tribal access to over 130 acres of Puget Sound that have been
restricted by this industry for over thirty years. More broadly, Washington’s decision will unite the entire U.S. Pacific Coast in excluding this industry from marine waters. Combined with Canada’s recent commitment to transition open
water net pens out of British Columbia waters, this decision also has the potential to eliminate a major limiting factor
to wild Pacific salmon recovery at a coastwide, international scale.

“I’m thrilled. It’s so rare the public gets to celebrate such a long-fought and massive environmental victory,” says
Emma Helverson, Executive Director of Wild Fish Conservancy. “For over five years, the public has been fighting
tooth and nail in the Courts, in the legislature, and through direct appeals to state officials calling for an end to this
dangerous and antiquated industry. It is truly incredible what is possible when the public unifies their voices and
works together with the law and science on their side toward the shared goal of a healthier Puget Sound.”

Cooke is the same company found at fault for the catastrophic 2017 Cypress Island net pen collapse that released over
260,000 nonnative and viral-infected Atlantic salmon into Puget Sound. Cooke purchased all of Washington’s net pen
facilities in 2016 with plans to expand exponentially in Washington waters.

In response to this expansion plan, Wild Fish Conservancy launched the Our Sound, Our Salmon (OSOS) campaign
in April 2017 to raise public awareness about the environmental impacts of commercial net pen aquaculture. In 2018,
a coalition of over 10,000 individuals and hundreds of businesses and organizations under the banner of OSOS,
worked in concert with Tribal efforts to advocate for Washington’s landmark law banning nonnative Atlantic salmon
aquaculture.

In July 2020, in response to Cooke avoiding the ban by transitioning to native species, the OSOS campaign launched a
new initiative, Taking Back Our Sound, to prevent Cooke from receiving new leases. Through this
effort, 9,000 individuals and 127 businesses and organizations called on DNR’s Commissioner of Public Lands Hilary
Franz, through a petition and direct actions, which included a Bainbridge Island city resolution, to deny new leases to
Cooke and to restore Puget Sound for the benefit and use of all. In making her decision over Cooke’s lease request,
DNR was required by statute to issue a decision in the best interest of the public.

“Since the Cypress collapse, Commissioner Hilary Franz has proven herself to be a leader when it comes to holding
Cooke Aquaculture accountable and protecting Puget Sound from this dangerous industry,” says Helverson. “It’s clear
from her decision, she heard the calls of the public loud and clear, and we could not be more grateful to Commissioner
Franz and her team for their dedication and commitment to protecting the health of Puget Sound for current and
future generations.”

Yesterday’s statement by DNR also included notice of a press conference this Friday, November 18th when
Commissioner Franz is set to announce a new state-wide policy to better protect Washington’s aquatic lands. The event
will occur at 11:00 am at the Fort Ward State Park on Bainbridge Island overlooking the Rich Passage net pen
facilities. WFC will be participating in the press conference alongside DNR and Tribal Nations, and we encourage
members of the press and public to attend and celebrate this major announcement. For event details or directions,
contact us.

“This victory for wild salmon, orcas, and Puget Sound belongs to no one person. Without the separate actions of
thousands of individuals, Washington’s Tribal Nations, businesses, organizations, chefs, fishing groups, scientists,
elected officials, and so many others working together over the last five years, this would never have been possible,”
says Helverson. “We hope you’ll join us on Friday, November 18th, for what is sure to be the first of many
celebrations over this landmark environmental accomplishment.”
###

Wild Fish Conservancy is a conservation ecology organization based in Washington state and dedicated to
the conservation, protection, and restoration of the Northwest’s wild fish and the ecosystems they depend on.

Our Sound, Our Salmon, is a public outreach campaign launched in 2017 and facilitated by WFC to raise awareness of
the harm caused by commercial net pen aquaculture and to lead the public in taking action to protect Puget Sound from this industry.