Some of the rarer fly fishing treasures are collectible copies of fly fishing books containing real flies. These masterworks combine great reading and research with actual flies described in the text, serving as a ready historical record of the fly tying design and craft of the period.

There are several classics in this category, including Charles Phair’s “Atlantic Salmon Fishing” from 1937 and the early rare William Blacker volumes as well as books featuring trout flies by Leonard West and Preston Jennings.

Charles Phair’s deluxe edition of his book on Atlantic Salmon Fishing is perhaps the most elaborate production, including both actual Atlantic salmon fly examples as well as their deconstructed component materials, including feathers, furs, hooks, and gut.

Of course, this book was published in a limited edition of only 40 copies. It included 14 complete flies and their materials on 12 plates, as well as a plate of hook examples and a plate of salmon silkworm gut varieties.

The flies in the Phair book were commissioned and tied by Farlows of London and the volume included prints of salmon fishing scenes by the master artist Ogden Pleissner. Number 14 of this edition sold at auction for $50,400 by Lang’s Auction in their Fall 2007 auction. 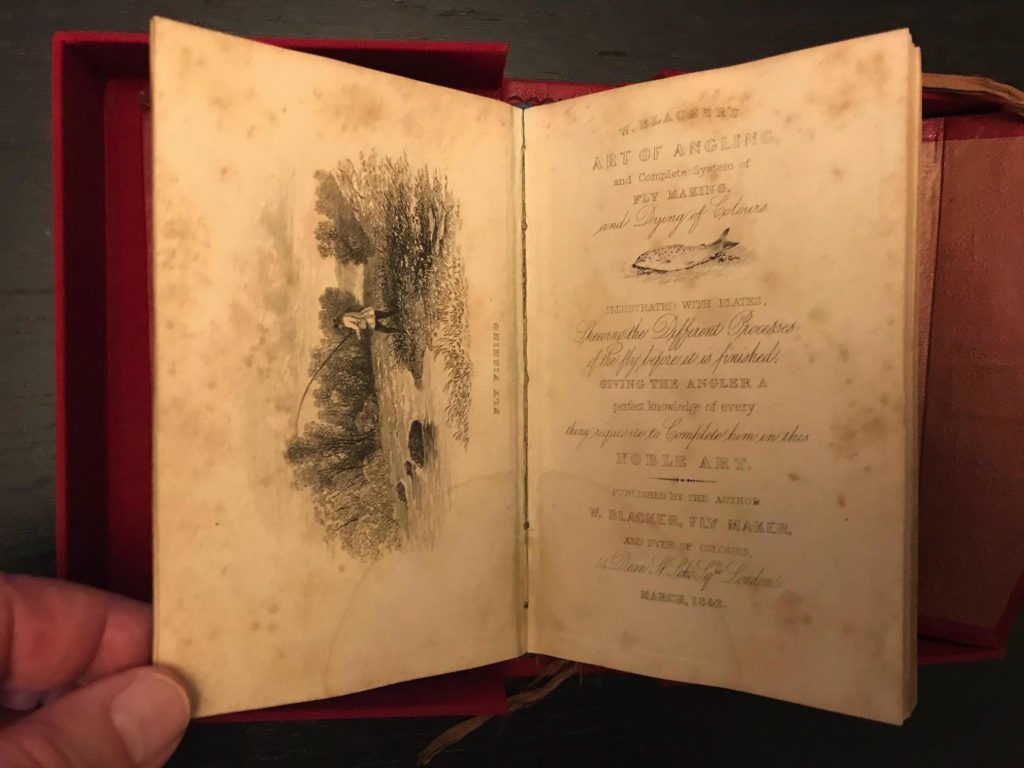 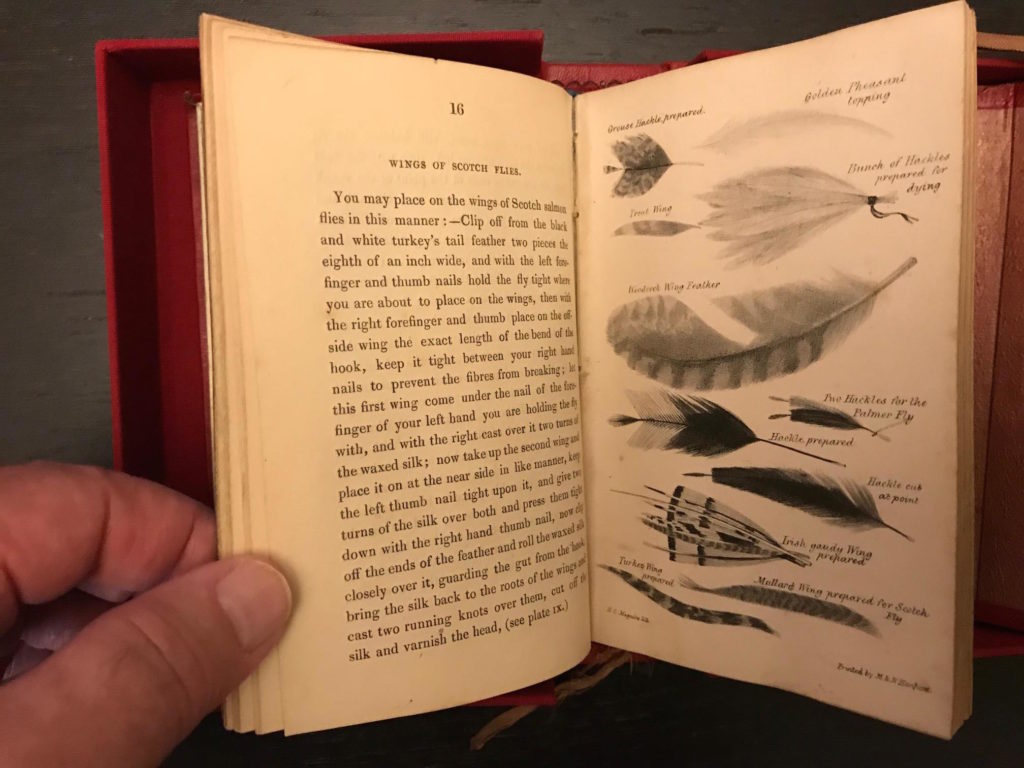 Some of the earliest classic fly fishing books included the works of William Blacker, who wrote: “The Art of Angling” and the “Art of Fly Making” in the mid-1800s. His books included many original flies, although there is great controversy surrounding who actually tied the flies and a number of flies were alleged to have been tied and inserted in the books many decades later.

Regardless, Blacker’s books are highly prized and extremely rare, with the scarcer editions bringing over $100,000 at auction. Photos pictured here are from the 1842 edition, provided by a private collector.

In 1912, the author Leonard West produced his classic tome “The Natural Trout Fly and Its Imitation” in a deluxe edition of perhaps 30 copies with 108 specimen flies included. It is a very rare volume, selling for $8,000 at a PBA Galleries auction in 2017. 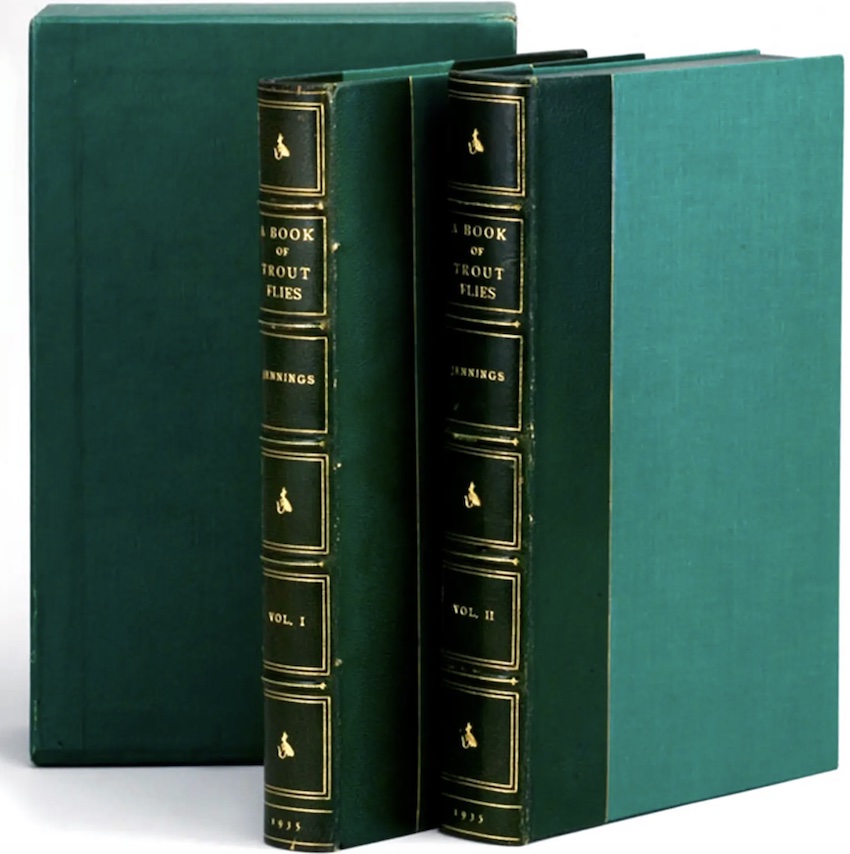 In 1935, a treatise on trout flies by Preston Jennings (1892-1962), a very influential fly tier who was interested in the imitation of the insects common to American streams and rivers, was published by The Derrydale Press in a deluxe limited edition of 850 copies. “A Book of Trout Flies: Containing a List of the Most Important American Stream Insects and Their Imitations” 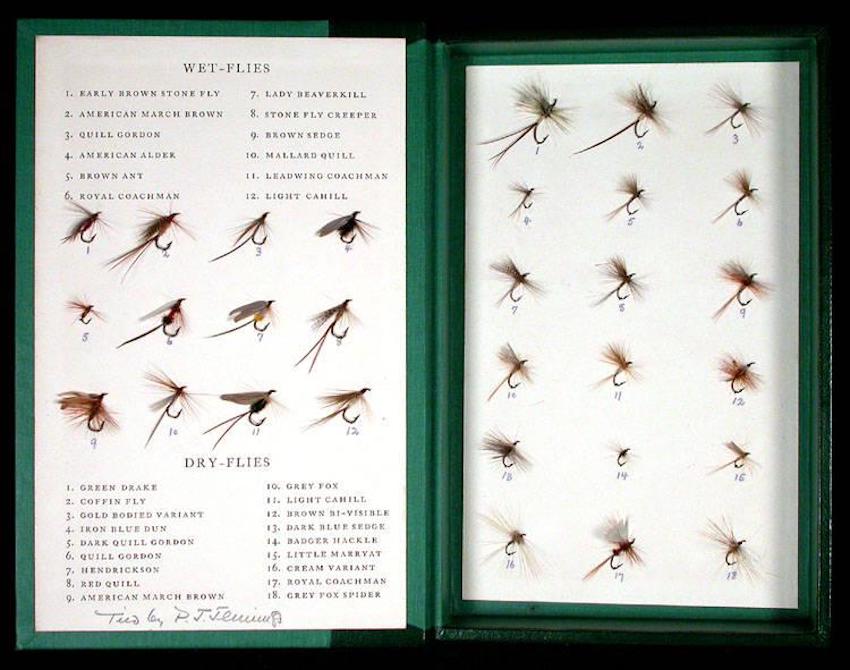 The book contains 30 mounted flies by Jennings (12 wet fly patterns and 18 dries) as well as seven hand-colored illustrations by Alma W. Froderstrom. A pristine copy of this edition signed by the author sold for $89,600 in the Fall 2007 Lang’s Auction.
The flies in these volumes provide a valuable snapshot of the state-of-the-art in fly tying over hundreds of years of fly design and innovation.

This will be the last installment of the weekly Cast From The Past Series. A huge thanks to Steve Woit who proposed this series and provided all the text and images. Be sure to check out his book Fly Fishing Treasures or catch him at a future fly fishing show event near you.