A robust Cast From The Past to close out February!

The history of the American bamboo fly rod is one of great innovation and craftsmanship dating back to the 1830s. Master rod builders are still making wonderful rods today in a vast variety of lengths, tapers, and styles.

The classic fly rod collecting community is one of the most vibrant, with the regular exchange of research and facts and conjecture on the Classic Rod Forum and other online venues as well as at regular rod building gatherings at the Catskills Fly Fishing Center and Museum and elsewhere.

Online auctions such as eBay as well as consignment dealers such as the Spinoza Rod Company sustain an active market for buying and selling all types of bamboo fly rods.

In general, rod values are a function of the quality and renown of the maker, as well as scarcity and condition. Provenance is also sometimes a key factor, including who may have owned or fished the rod and exactly how it has been passed down over the ages. 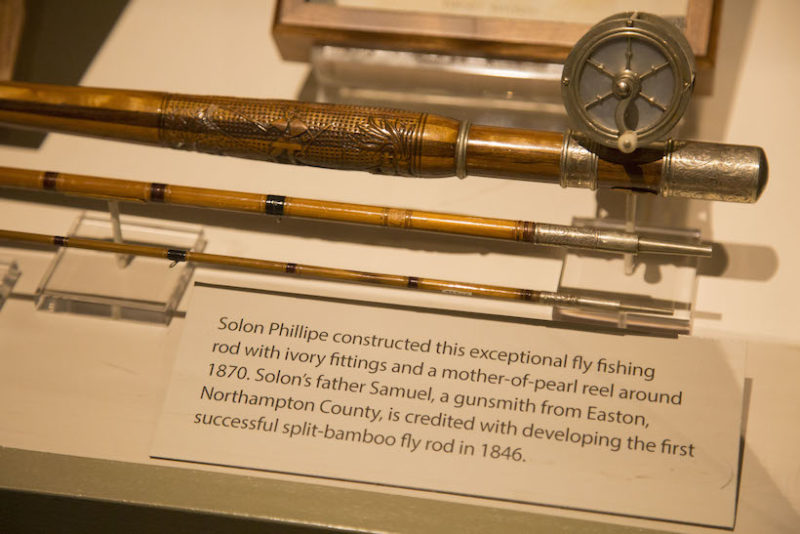 The bamboo fly rod is a quintessentially American creation. Even though complete bamboo fly rods were certainly made in Britain in the mid-1800s, it was American rod builders such as Samuel Philippe of Easton, Pennsylvania, Thaddeus Norris of Philadelphia and C. F. Murphy of Newark, New Jersey, who, among others, advanced the design of split bamboo fly rods to high art.

Some of the earliest fly rod makers were also gunsmiths who had learned to fashion and machine wood and metal, and some of the fine engraving in early antique rods resembles the fine scrolled engraving work on guns.

From the early “rodsmithing” days, when some rods were made completely or partially with woods such as hickory, ash, ironwood, or greenwood and lancewood, the making of rods using sections of split bamboo soon followed.

There is some controversy over who developed the first completely split bamboo fly rod as well as who actually invented the four-strip and six-strip construction of the rods.

Hiram Leonard of Bangor, Maine is sometimes credited with perfecting the six-strip rod, reportedly improving upon an earlier design by Charles Wheeler. Other rod makers followed, including Charles F. Orvis of Manchester, Vermont, who started making bamboo fly rods in the early 1870s.

The amazing variety in the evolution of the fly rod can be seen vividly in Jeff Hatton’s amazing Gnome’s Traveling Rod Show, a vast collection of hundreds of the rarest and historic fly rods from the 1820s to the 1950s.

A full display of the rod show appears in my book “Fly Fishing Treasures” and captions for each of the hundreds of rods are posted online at: https://flyfishingtreasures.com/gnomes-traveling-rod-show/

Following the publication of Marty Keane’s excellent book: “Classic Rods and Rodmakers” in 1976 and A. J. Campbell’s “Classic and Antique Fly Fishing Tackle” in 1997, a great deal of research and interest in classic bamboo fly rods accelerated.

After Hoagy Carmichael published his book “A Master’s Guide to Building a Bamboo Fly Rod” with his mentor and master rod maker Everett Garrison, now in its 7th edition, hundreds or perhaps thousands, were inspired to try to build their own models. Carmichael made about 100 rods of his own, which are highly collectible.

The manner in which the bamboo cane culms are selected, cured, split, beveled, tapered, and glued together varies greatly by the maker, and due to the very nature of the material, no two rods are precisely the same.

The design of the individual tapers that determine the action of the rod can include a high level of engineering sophistication, artistry and know-how. Allegiance to specific designs and makers can become truly cult-like.

Some of the most collectible bamboo fly rods include high-end makers such as Ed and Jim Payne, Gillum, Garrison, Dickerson, Powell, Winston, Carlson, and Young as well as contemporary rod makers like Aroner, Brandin, Carmichael, and Taylor.

These high-end rods will often set you back thousands of dollars and some of the earliest and rarest rods from Thaddeus Norris, Hiram Leonard, F.E. Thomas, Thomas Chubb, John Krider, B.F. Nichols, J.B. Crook, and Orvis, among others, are true museum pieces.

The Heddon, Grainger, Phillipson, Montague, South Bend, and Shakespeare companies, and others churned out thousands of less expensive rods as well.

If you find a complete Samuel Phillippe rod, please let me know—not a single one seems to have survived after the last known example perished in the fire following the bombing of the Anglers’ Club in New York City in 1975.

While appreciating the impressive history of innovation and craftsmanship in the construction and evolution of the bamboo fly rod, it is also wonderful to fish them and sometimes even sweeter to bring a fish to the net with the one you have made with your own hands.

So, take good care of your bamboo rod, as it may be quite valuable someday. Better yet, engrave the reel seat of your rod, as iconic rod maker Fred E. Thomas did in 1914: “If not in Fred E. Thomas Hands, This Rod is Stolen.”

3 thoughts on “Cast From The Past: Bamboo Fly Rods”