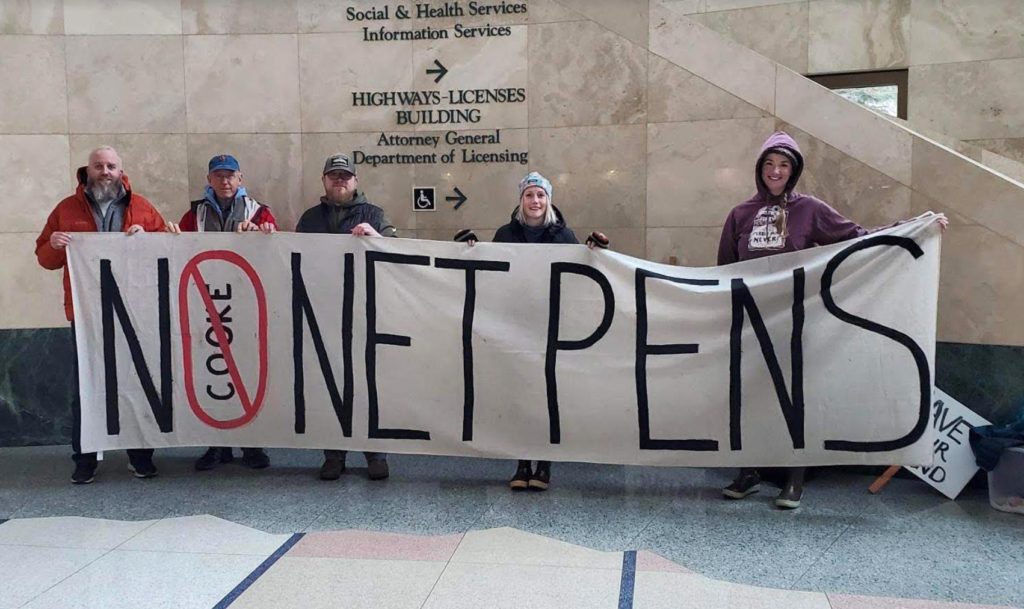 In August 2017 more than 250,000 non-native and disease-riddled Atlantic salmon were spilled into Puget Sound. Canadian company Cooke Aquaculture’s Cypress Island net pen had collapsed after the company neglected to clean thousands of pounds of shellfish, algae, and other biofouling debris. The net pen imploded, releasing hundreds of thousands of sick fish to mingle with dwindling wild salmon populations as they returned to spawn in Puget Sound rivers. Despite claims from the company that the fish were harmless, as well as attempts to buy the silence of local fishermen and tribes, Cooke’s Atlantic salmon were later caught more 50 miles up the Skagit River and as far away as the west coast of Vancouver Island.

For Washingtonians who value the health of the Salish Sea and its native salmon, the fish farm disaster was a wake-up call to the threat posed by commercial fish farms in our public waters and the looming proposals to expand their operation. 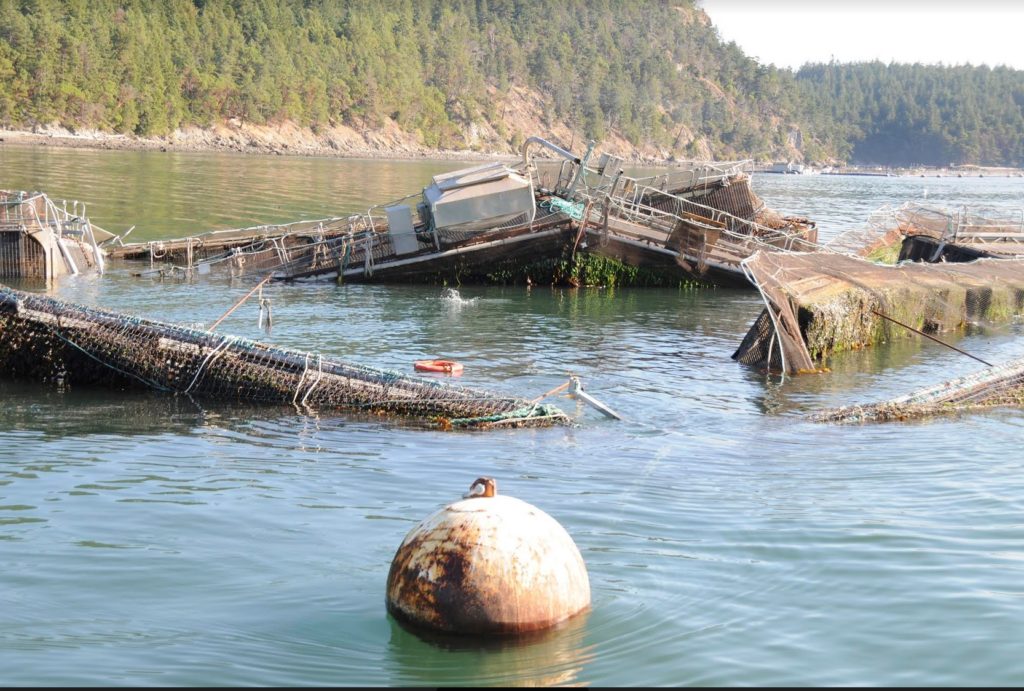 Months after the Cypress Island pen failure, Washington’s clean water and wild fish advocates won an important victory in the battle against commercial fish farms in our marine waters with the passage of House Bill 2957. With this legislation, Cooke Aquaculture was ordered to phase out all fish farms raising non-native species by 2025. I remember looking at photos of the bill being signed. An immense amount of hard work had gone into getting us here and tears of relief welled up in my eyes. Little did we know at the time, the new law meant a bait and switch would soon be at-hand.

Less than a year later, Cooke Aquaculture came up with a plan to wriggle through the legal loophole in the regulation. If they were no longer allowed to raise Atlantic salmon, why not try to farm a “native” species in the same Puget Sound net pens instead?

Their new proposal to farm strains of triploid rainbow trout in existing net pens, and call them “steelhead” for marketing purposes, was sent to the Washington Department of Fish and Wildlife (WDFW) for approval. Despite thousands of public comments opposing the plan and clear opposition from Washingtonians, tribes, fishermen and conservationists, WDFW gave Cooke a green light for a new five-year permit. Cooke could then apply for the other required permits in order to move forward with open-water fish farming in Puget Sound yet again.

These “steelhead” farms have the potential to be even more harmful to Puget Sound than the existing Atlantic salmon operations because of the possibility of these “native” fish to successfully breed with wild fish in the event of an escape. On January 31, 2018, Ken Warheit, Chief Scientist for WDFW’s Fish Program, testified before a committee of the state legislature saying “we suggest that if the State is going to restrict marine fish aquaculture it removes authorization also for other non-native fish. More importantly, it should also remove authorization for native salmonid marine commercial aquaculture which WDFW considers to be a greater risk to the State’s native wild and hatchery salmonid populations, than is Atlantic salmon marine aquaculture.”

None of this should come as a surprise. Cooke Aquaculture is not known for its good business practices. In addition to the Cypress Island net pen failure, Cooke pleaded guilty to using illegal pesticides to treat a sea lice infestation in one of their salmon farms off the coast of New Brunswick, Canada in 2013. The pesticides inevitably killed hundreds of wild lobsters in the vicinity of the farms. In 2019 Cooke was cited for several violations in Maine, including exceeding fish density limits in its net pens, failure to provide complete annual stocking notices on time, and failure to properly sample for sulfides in several facilities. Cooke has demonstrated time and again that its priority is profit, even if it comes at a great expense to local ecosystems.

The next major permit Cooke needs is an updated water quality permit from the Washington State Department of Ecology (DOE). In April 2020, the DOE announced that it would be accepting public comment on Cooke Aquaculture’s applications to modify its water quality permits for their “steelhead” farming operation. This public comment period serves as another important opportunity for public opposition to be heard. The deadline was recently extended and we have until June 8th to demand that DOE deny these modified water quality permits. The pollution from Cooke’s open water net pens pose a substantial threat to Puget Sound water quality. Puget Sound is not a sewer, and it should not be treated as such by these feedlot fish farms.

Washington is the only state on the entire West Coast of the United States that still allows open water fish farming. Oregon, California, and Alaska have all banned these net pen operations due in large part to pollution caused by farming practices and the potential for disease transmission from farmed to wild fish. As a Washington resident, it’s frankly quite embarrassing that these operations still exist in Puget Sound. Everyone around us put out this fire years ago, while we’re standing here spraying it with gasoline.

In Cooke’s original application for the proposal, the company noted thirteen native species listed as federally Endangered, Threatened, or Of Concern as being known to come into contact with their existing net pens. Among these are the Southern Resident Killer Whales, which experts believe to be on the verge of extinction. Cooke also noted four species that were listed as endangered or threatened at the state level, with an additional eight species classified as candidates for potential listings, including Puget Sound Steelhead, chum salmon, and Chinook salmon.

Washington’s threatened marine species deserve better than to be subjected to the excessive parasitic sea lice, antibiotics from farm feed, enormous amounts of nitrogenous waste products, and diseases caused by high stocking densities and stress–all threats that will persist at the farms despite Cooke’s species swap.

To say that I am disappointed in the Washington Department of Fish and Wildlife for approving Cooke’s proposal and justifying their decision with a 30-year-old Environmental Impact Statement would be a gross understatement. Cooke Aquaculture’s open water net pens are an affront to our clean water and wild fish, and since those two stanchions of our local economy and communities can’t speak for themselves, I will do it for them. It is simply unjust for the business interests of a destructive Canadian fish farming company to take priority over protecting our natural resources and the sustainable, Washington-based economies they support.

I strongly encourage Washington residents to stay informed about this issue and to speak up before the current public comment period ends for Cooke’s revised clean water permits on June 8th: Our Sound, Our Salmon has a great resource page for writing effective comments and you can submit your letter to the Department of Ecology there. It only takes a few minutes.

I’d also encourage you to contact Governor Jay Inslee and Commissioner of Public Lands, Hilary Franz. They have the ability to terminate Cooke’s fish farm leases, required for operation in our public waterways. Sending a couple of emails or making a phone call can go a long way in the fight to protect Puget Sound. I hope you’ll join me in doing so.

It’s past time for Washington to join other West Coast states in eliminating commercial fish farms from our public waters. In accordance with the will of Washingtonians and the intent of H.B. 2957, we must encourage the state not to double down on a dangerous industry that puts native salmon and steelhead at risk for the benefit of a foreign corporation with an atrocious track record.

A Washington resident for nearly three decades, Bridget Moran is an avid angler and coldwater conservationist. She is the president of North Sound Trout Unlimited and the chair of North Sound Women on the Fly. Bridget holds a degree in Fisheries and Aquatic Sciences from Bellingham Technical College and has worked in both hatchery settings and natural resource monitoring over the last two years. Her writing has been published in Dun Magazine and The Flyfish Journal. The Cooke Aquaculture net pens have been the focus of her attention over the last several years, so much so that she recently organized and attended a demonstration in Olympia last winter to protest WDFW’s approval of Cooke’s intended “steelhead” operation. When her head’s not buried in the case against Cooke or coordinating conservation projects in the Nooksack and Skagit basins, Bridget lets loose in the mountains on bikes and skis.